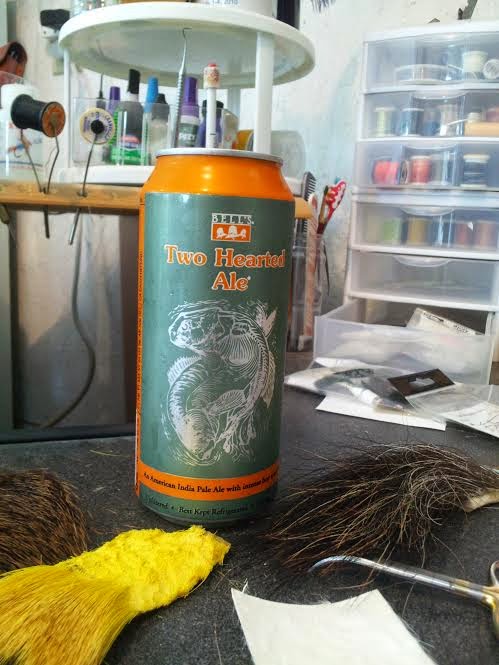 Do I like Two Hearted Ale because of the way it tastes or because there is a brook trout on the bottle, a story behind the name, and it goes well with tying flies? What the fuck is on the can by the way...it looks like a cross between a carp and a walleye?

I promised my wife I wouldn't fish tonight.  I'm not really sure why. I guess I thought it was a nice gesture.  A "gas" budget may have something to do with it too.  I didn't fish last night either.  The hex are officially done up here...I think.  But what if they're not?  What if they're about to come off in a shit storm of glorious bugs and even more glorious fish, carelessly getting their fill?  What if there's no one on the entire fucking river system, and the fish are going crazy?  I should be there.  Hell, what if the ONE I lost a few weeks back is sitting in that same spot...the spot I've returned to so many times, waiting, watching, forsaking the rest of the river, even the rest of the fish in the river, for just one more shot at him?  Maybe it was a her.  I wonder if I'll ever lay eyes on him...her...I wonder if someone else will catch him and kill him, or if he'd already been caught and released. Probably so.  He was a smart fish.  It didn't take him long to wrap me around the logs, even well prepared as I was with my 8 weight rod and 10lb tippet.

I wonder if, when they manage to wrap the line around a log, it is a purposeful pursuit to the trout, or if they're just headed home and take a circuitous route to do so, in the process creating a lasting legacy of "the one that got away".  I was reminded recently that these are the most memorable fish, worth more than all else in the cosmic cost scale of time spent and things remembered.  It was only a few weeks ago, and the fish has now achieved legend status in my world. I wonder at his epic size in a few short years. A 20lb brown, no less.  My white whale.
Posted by squabblers 24/7 at 8:40 PM 4 comments: I specifically target trout because it gives me an excuse to create adventures.  Because all at once it allows me to feel like a kid and like a capable adult.

It gives me a reason to triple check my compass route, or to even own a compass for that matter.  It gives purpose to my aimless wandering.  A reason to check my maps, calculate distances between un-named roads that are just as likely to wind up ending at an old fallen down bridge or taper off to a squirrel trail as they are to lead anywhere of consequence.

It affords me the opportunity to not have a destination...to not know where I am going, but more importantly, not to care.


Sometimes i feel like i have a lot to say, sometimes little.  I fly fish.  It gives me purpose, it gives me balance, it gives me headaches and hangovers.  Read it, enjoy it...or don't.  From time to time I may have some great tips, techniques, etc .  If you're looking for philosophical life perspective through the eyes of a fly fisherman...you're in the right spot.   For the truly life changing, I'd recommend Ted Leeson, Thomas Mcguaine, Dave Ames, John Gierach, Robert Traver, or any other number of gifted writers.

Fishing, fly fishing in particular, seems to be more than a hobby or a passion for some people.  It is who they are.  It's an addiction that courses through our veins, controls many a waking thought, and occupies many a night's sleep.  Like most blogs, there is a good chance almost no one will stumble their way to these pages, but on the off chance a few do, i would again like to say welcome.  My grammar will fail me, my words may not be life changing, but hell...neither one of us are fishing right now, so why not?