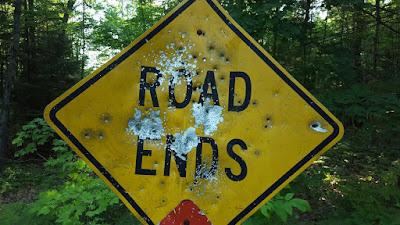 When I was a boy, probably 10, my grandpa gave me a fly rod.  Well, kind of.  He gave me half of a fly rod.  The other half had been lost on the way out of a god forsaken swamp somewhere in the middle of nowhere, never to be seen again.  To fix this, he had fashioned the top half of an old spinning rod to take the errant half's place.  It would have been fine with me if it wasn't for how beautiful a crimson color the blank was. I spent way to much time imagining how grand a rod it would have been were it whole again.  To accompany the rod, he gave me a reel and some fly line with a leader on the end.  This was also fine...except the reel was one of those automatic ones, which was a new concept to me, and really something...when it decided to work.  To practice casting, he tied on one of those rings that come off of the lid from a gallon of milk and I was off to the races.

If my memory serves me correctly, I can almost see the VHS of a fly casting demonstration, but of that I'm not 100% certain.  It feels familiar though.  If you've never tried to cast a half fly rod/half spinning rod combo I'd suggest that you ought to.  If you can throw a decent loop with that I'd be willing to bet you can out cast just about anyone.  Needless to say, I couldn't quite make it sing, and not for lack of trying.  To add to the frustration the concept of leader/tippet was foreign, so as soon as I had caught enough trees and retied enough times to eat up the leader, a straight mono leader was my answer.

I gave it a hell of a go, and even brought it along to the headwaters of one of the trout streams my dad and I frequented at the time.  I remember the excitement when a few small fish, chubs no doubt, chased the fly around the top of the water for the first time.  The problem was the trees...the god damned trees.  It didn't take long to realize that a spinning rod was a far superior method for the time being...at least if you want to catch fish.  If you want to have fun in the backyard, a fly rod may be the right choice, but that was about it.

Fast forward a year, maybe two, and my dad and I started spending time in the U.P...together.  It started at a spot he used to camp while bear hunting.  A smallish campground...5 or 6 spots, with a water pump and later a pretty decent porta potty set up.  Our first several trips up were normally spent exploring water...canoes, float tubes, and eventually as the spots were narrowed down, just wading.  I was able to stay interested in fishing for about the average time for a kid my age, a few hours.  After that, throwing stuff in the water, speeding down the runs, and eating snacks kept me entertained.

The more we fished the more I began to realize that I was probably being treated a little differently than most kids and I didn't want that to change.  I had freedom.  If you've ever fished with my dad it wouldn't take you long to learn that he regards fishing as something best done with someone, alone. You should arrive together, work out a game plan together, go your separate ways, then talk about how the fishing was when it's all said and done. My dad and I may enter the river at the same spot, but he's going to fish up, and me down...or maybe he'll walk upstream a good clip and fish down to me.   Either way, I was given adventure with a sense of security.  I fished in the knowledge that he may be around the next bend, or might be waiting at the truck when I was all finished for the day. We fished together, alone.  A unique concept that I'm at a loss to explain, yet seems to have etched deep, defining consequences somewhere on the permanent version of myself.

My dad always had a coffee cup in the truck.  Naturally, as my father's son, so did I.  Mine normally held pop or water, but it was the idea that counted.  Imagination is a gift I was cursed with, so it wasn't uncommon for me to work my mind into a frenzy if my dad wasn't back to the truck "on time". If he wasn't around the bend that I thought he should have been...panic.  I'm 30...this curse still haunts me.  This day was no different.  I had never been to this section of river before and didn't quite realize that I had taken the wrong fork.  When my dad said "I'll be upstream", there's not much that can be screwed up.  After what felt like hours and miles of heading upstream, and was probably more like minutes and yards, I decided I had best go wait at the truck.  Eventually no doubt, in my terrified young mind, I would have to walk to the nearest house as darkness set in, to report his disappearance or abduction. 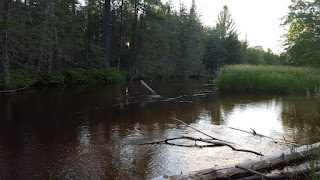 After a few lifetimes of waiting, my dad's head popped out of the trees...instant relief followed closely by embarrassment of yet another unnecessary, imagined crisis.  As the situation was cleared up I decided to take a quick look at the forks that I had somehow missed on the way up while my dad took his waders off.

When I got back in the truck that day...this day...for the second time, still basking in the elation that is "life as I know it"...that is to say that the status-quo of my life had not changed in a significant way as I had feared, I grabbed my coffee cup...the one with the Colorado Avalanche logo on it...the one with the lid that never seemed to close right...and took a hearty swig...and promptly spit it across the dash as I yelled in disgust.  "Oh shit" was my dad's explanation. As I ripped off the lid, the lingering flavor in my mouth already told the story.  We used to keep fish...most fish...and there were two brook trout in my cup.  The flimsy excuse of not having a cooler and the badly hooked fish did little to ease the sting.

One of the things that strikes me most about these early trips to the U.P. was, on at least two occasions, my grandfather was able to come. He didn't necessarily fish the entire time, but he was there.  At breakfast, for a little while with a rod in his hand, and around the campfire that night.  As a kid, the passage of time doesn't mean a whole lot.  I'm not sure at what age I stopped hearing people say "you have your whole life ahead of you" but I can tell you without question, that I don't hear it anymore.  If I would have known...maybe appreciated the fact that never, as an adult, would my grandpa accompany me on a fishing trip...exploratory mission...or just an afternoon on the river, I would have...what?  I don't know, taken more pictures?  Watched his every cast?  Cherished those moments even more?  Maybe.  What I do know is that the idea of knowing when something good...something once in a lifetime is coming to an end, the idea of knowing it will be coming to an end seems incredibly important.  It seems to make the idea of that thing disappearing easier to swallow.  My guess is, in reality, it doesn't.  Ask any widow whose watched as Alzheimer's...or cancer...ripped their world apart.  It creates a new set of problems.  Is it really better to know that this may be the last conversation you'll ever have with someone or to carry on in ignorance?  Is it better to know that this may be the last time your child will ever fall asleep in your arms, forever to old to rock to sleep. The last bed time story you'll read.  The last time your dog will ever point a bird...better to know that this is the last campfire you'll ever share with both your dad and his dad...or to convince yourself that time isn't real...that good things do come to an end, but not today...not this day. Soldier on in the belief that things don't change, and when you need him, your dad will be waiting around the next bend, or just over that ridge at the truck. 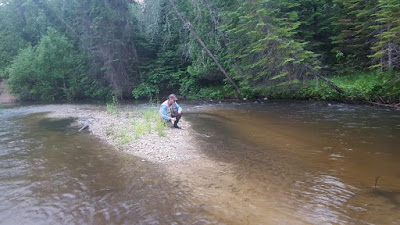