Reflections From the River: The week in fishing Sep 6th-12th


I'm not normally this type of person, but damn it I'm I glad this week is coming to a close.  I got out fishing 3 times this week, and strangely enough they were all for salmon. Not a single trout trip in the mix.  Not ideal, but acceptable.

There are a few reasons this week was such a bad week to get out, but the main one is my son.  Dealing with medical issues is never fun, and the poor guy is at the beginning of what may be a long road.  Tuesday we took him down to the children's hospital and received the diagnosis of tourettes syndrome.  He's 6.  My wife and I don't quite buy the diagnosis yet...it conflicts with the other pediatric neurologist, and something is still off.  Soon we'll be off to see another specialist, maybe at a different children's hospital, but we need to figure out what the hell is going on.  He's a different child than he was last year.  At best, it's something called "inattention adhd", a relatively unique disorder.  It doesn't entirely explain the motor "tics" he has though, but tourettes doesnt explain the "spacing out."  Not the worst diagnosis out there by a long shot, but it'll make life tough on him.  At worst, he's on the autism spectrum.

It could always be worse I guess.  I'm not sure why I say that.  I don't think anyone anywhere has ever heard someone utter those fucking words and felt better afterwards.  Fuck.  We've never really dealt with anything major like this before.  At one moment I feel like I may just physically let lose on the next person to cross my path, the next I want a hug, and for someone to tell me it will be all right.  It will all work out for the best.  It will be all right...right?  Maybe.  Probably.  Maybe not.  This is probably why I chased salmon this week.  The salmon can be a glorious fish for mindless casting...truly letting your mind go and losing track of time, waiting for the explosion of a fish or emotion, whichever comes first.

On a positive note, my buddy caught his first salmon!  A fantastically ugly and gorgeous buck that waited until the last second to attack. "Holy shit!  It's BIG.  Do you think it's a salmon?"  It was hilarious watching him try to hold it for the picture.  "It's too big, what do I do?" 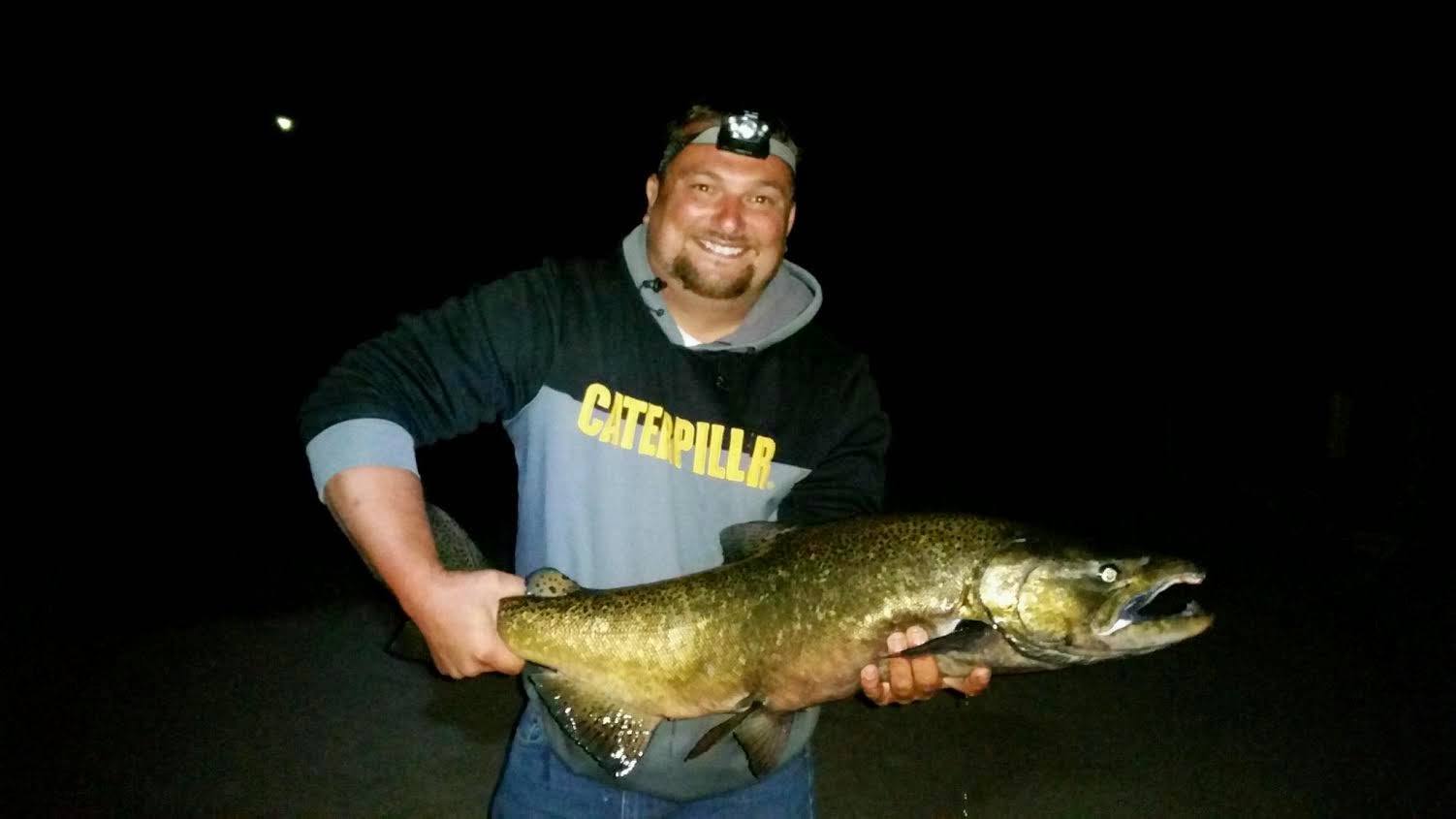 The last two times I went by myself.  The first night a husband and wife parked their kayak 30 feet from me and proceeded to cast they're spinning rods (which they were holding upside down) in my direction.  Luckily, I wasn't really there to catch fish anyhow.

I finally got my hands on a salmon last night. Well...kind of.  I started the night by wading as deep as I could into the "serene" Cheboygan river. Within minutes I had my first fish on:  the second biggest walleye I've ever caught.  I slim 9 incher.  About 20 minutes later I was into my second fish of the night.  A feisty 12 inch rock bass...on 15lb tippet.  I was starting to feel like a real sport.

I swung an egg sucking leech for about another hour when I saw it:  A nice size salmon jumped right in front of me.  Then again.  Then it floated to the surface at my knees.  It slowly tried to get back down and began a slow course downstream, tail up.  I took a few steps down and casually grabbed it by the tail (a dangerous move in the Cheboygan river).

I spent about 5 minutes reviving the fish and contemplating the contradictory nature of what I was doing. I was overcome with the feeling of how futile this all was...is.  Not just the resuscitation of this particular fish.  But all of it.  The fishing...working...life.  I've modeled my fishing pursuits around a fly rod and around catch and release.  I stood there giving CPR to a half dead fish, who, for some reason or another thought I was a safe bet to die in front of; a salmon that, regardless of what I do, will be dead in about a months time.  A salmon that was probably so sick of seeing spoons and treble hooks ran in front of it that it may actually have been begging for a quick death.

The fishing was over at that point.  What else can you do?  Go on fishing like it hadn't happened, pretending like it actually mattered whether or not I caught a fish when one, literally, landed at my feet only so I could temporarily revive it so it could swim away.  Pretend like it was going to live or even make it through the night.  A temporary fix.  The salmon is almost certainly dead by now...but maybe the goal was to feel like I accomplished something.  Maybe I just didn't want to see it die and it was easier if it died out of sight...out of mind...not my responsibility.  It would have tasted fine on the grill, it wasn't decaying, relatively silver, a little green. Probably caught and fought until the last second only to have broken off.  Slipped away, temporarily escaping his fate only to come face to face with it downstream as we all inevitably must.   It's all downstream.

I want him to be him.