There’s something subtly special about driving home down an empty road at 2 in the morning (even more special if I have a cigarette hanging out the window, but the hex is done so my smoking is too). The first part of the drive involves no houses, no streetlights, the only sign of life is me and the occasional deer, low flying owl, or porcupine lumbering across the road. It is freedom at its finest. I find myself overcome by a feeling of superiority at times like that.  It's hard not to.  The feeling that I have life figured out. Like I wouldn't want to be anywhere else in the world, western rivers be damned. I think that feeling is what I’m really chasing when I fish and the reason I continue to do it. When most other people at that hour are terrified of passing cops, silently recounting how many drinks they've had, I smile at the thought of explaining why I'm out this late, proving that not all things that happen after 2 am are mischievous. Well, maybe they are. I like to drive slowly through my neighborhood. I enjoy the sight of my seemingly lifeless house as the headlights wash over it and the idea that everyone is comfortably sleeping inside. I’m always greeted by the dog, but he has long since given up barking and lumbers out of the bedroom, eyes barely open, acknowledges me and my stupidity, then drags himself back to his warm bed. I always spend at least 30 minutes unwinding, recapping the night. If I've lost a nice fish it’s more like an hour maybe more. If not much has happened I watch the DVR’d Daily Show and if I can stay awake, the Colbert Report. Sometimes my wife manages to wake up long enough to ask how the fishing was and falls back asleep during the answer. I appreciate the gesture, it doesn't go unnoticed. 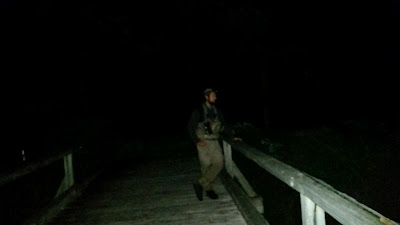 Night fishing in Michigan. Sometimes I like to fancy myself as the hardcore elite, one of the dedicated few who soldiers out at night to chase big browns. Since I don’t have direct access to a drift boat I give myself even more points for being a dyed-in-the wool extremist. Actually though, night fishing suits me perfectly. The kids are in bed by about 7:30, leaving the rest of the night open for anything, assuming my wife hasn't made other plans.

Mousing is of course different than chasing hatches in a lot of ways, but for me the biggest difference is urgency. I no longer feel like I have to be on the water 3 hours before dark with my spot staked out, ready to defend it. No longer feel the need to painstakingly analyze where the most likely rise will happen, where the most fish are holding, and where the least people will be. It is truly easy going. Packing up the jeep to head out only takes a few minutes and normally only entails grabbing my waders and boots that were hanging out to dry. Since the desperation isn't there, I often times don’t 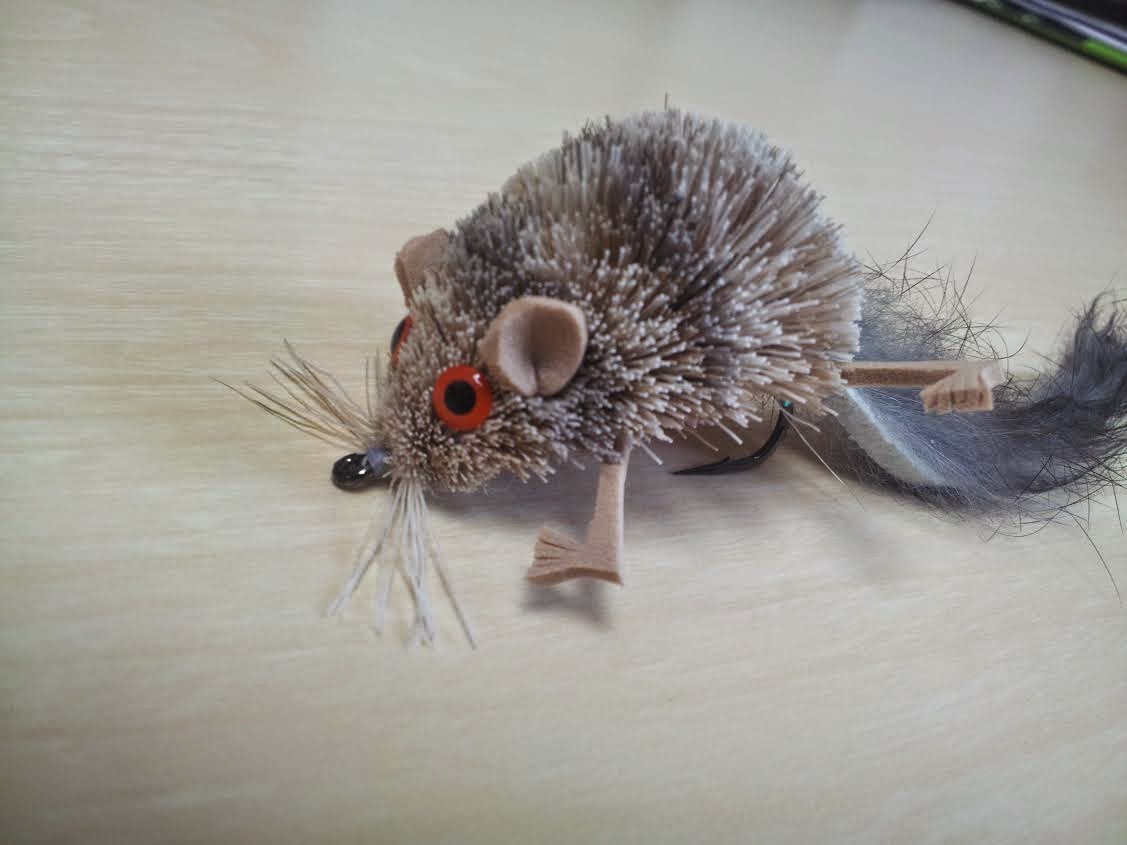 even leave until just before dark, getting a good hour or two in with my wife so she doesn't entirely forget who I am. I like to mouse with another person, but enjoy having the river to myself as well. Arriving at the river,  I take the time to survey the water, often catching the tail end of a decent amount of sulphurs, whiteflies, or any other number of unexpected hatches, but normally they don’t amount to much. On occasion, I have to furiously re-rig to cast at a nice riser before the setting sun takes the bugs with it. I used to use 3x to 5x tippet when mousing...I’m not really sure why, I guess I didn’t know any better. Thankfully, I don’t use much less than 0x anymore, sometimes forsaking even that for something bigger and stiffer. Also gone are the days when I used real mice. Ornately tied spun deer hair creations with eyes, 4 feet, 20 toes, whiskers, 2 folded ears and tapered tail...the whole nine yards. I really went all out. I still occasionally tie one on, but mostly it’s some rabbit zonker foam creation with too many legs...and not enough heart. 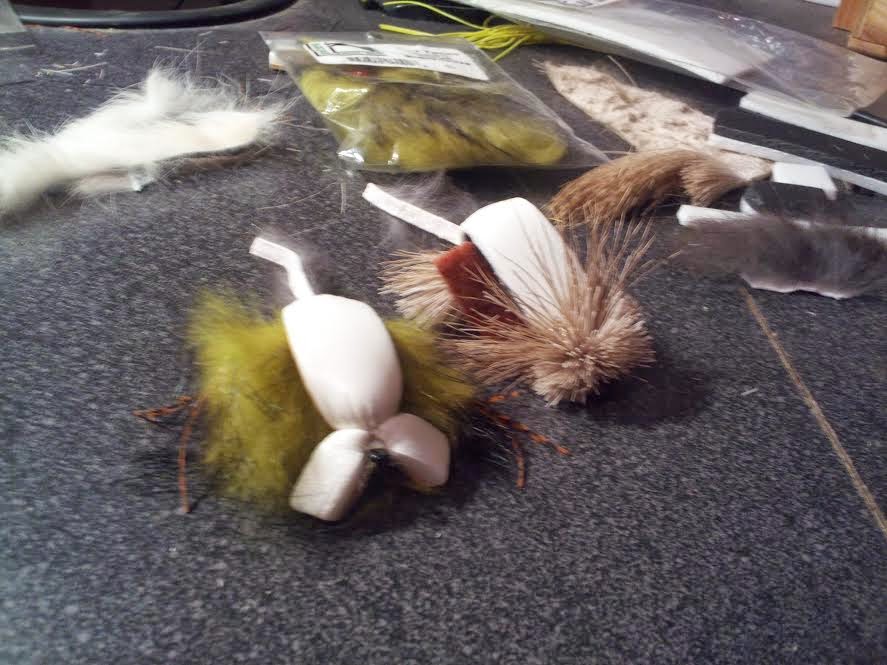 If I’m fishing with someone else, I always prefer to let them go first. I like to watch other people’s techniques, and would rather give them first chance at fish. There are so many different ways to mouse that I don’t think there is a prevailing method anymore, or maybe never was.  Swinging, dead drift, swinging with occasional plops, or just plopping it all the way back in. Everyone has their preference, and I suppose they all work best at different times. I change my approach quite often, and if I happen to hook a fish on one method, probably purely by chance, I keep that method for waaay too long afterwards. 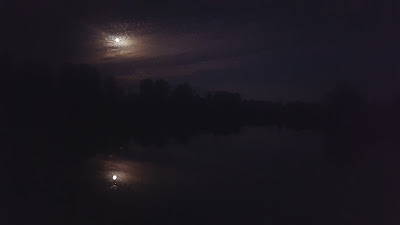 It’s also worth noting the way in which people will re-tie or re-rig. I fish with one person who doesn't use a light, even to re-tie. All of my attempts at such masterdom have fallen way short. Other people have no problem shining their light all over the god damned river, like the fish are blind deaf and dumb, inducing night blindness on anyone within a half mile. Others will sneak off near the bank, and, shielding the rest of the river from their disruption, quietly tie on with the utmost care, trying to use the red light on their lamps which supposedly is less likely to spook the fish. I subscribe to the latter, but have seen people catch fish after destroying the good lies with their light pollution...who the hell knows.

There is also a difference of opinion when it comes to how much river to fish. One night time companion generally fishes a shorter stretch of river, spending the time and truly fishing each spot with the patience of a thousand monks. Others use the blanket approach with the goal being to cover as much water as possible, more reminiscent of floating. Sometimes the spot is famously hard to get to, other times I’m parked feet away from the river. That’s part of the beauty of night fishing...even the most practiced day time angler doesn't have access to the fish an amateur does at night in Michigan. The scale has evened and hacks like me get a chance at a few big ones as long as we’re willing to pay our dues, which can include but are not limited to:

broken rods, taking a swim (some more than others), ripped waders, ruined smartphones, lost hemos, dropped fly boxes, catching mice and streamers with your face, deciding how to take a bat off of your hook, torn up arms, the occasional dead flashlight or headlamp immediately inducing panic, bad compass routes and long roundabout walks back to the jeep, dead car batteries and no cell signal, warm beer, and a hell of a good time that most will never experience.


There are a few demons that I have to overcome more often than I’d like to admit. It’s strange how similar a raccoon can sound to what I would imagine an impending alien abduction sounds like. For me, I have to manage fears. That includes fears of things I know exist...like bears, cougars, pissed off elk, AND things that probably don’t exist...like big foot, river monsters, someone waiting for me to get around the next bend so they can rape me, and alien abductions (not that I don’t believe in aliens, but maybe not so much the abduction part.)  I've seen and heard some strange things night fishing...a time when I should be in bed.  What I swear were muskrat fornicating on the bank, what I can only assume was a rabbit being eaten alive by a pack of rabid coyotes, my buddy trying to convince me that we heard a ghost, deer stamping and defending territory, menacing bear grunts, and what I will officially go on record as saying MUST have been a band of 20 raccoons being tortured  by god knows what...I'd put my money on a soon to be discovered swamp creature...or a squatch.  Probably a squatch.
Beavers are a whole different subject, probably deserving their own book, but I'm always shocked at how many times the same beaver can make my ass pucker in the same night. I don’t care who you are, when a beaver slaps his tail 10 feet from you in the pitch black, you’re ducking for cover and imagining the worst. The way my heart races can’t be healthy and I’ve since concluded that this is the way I’ll eventually meet my end...heart attack set off by a beaver’s displeasure that I was infringing on his space.

It’s amazing how focused you can become fishing in the dark. About an hour or so in, you start to forget what you’re doing.  Your body knows only the familiar motions, temporarily on auto pilot. Some nights it is so dark you begin to wonder if the night will just swallow you, or if the profound depths of the water will do it first.  Eventually you have to take a short break so you can remember where you are. You can really become disoriented in no time at all.  (It's normally at times like that you hook a fish and subsequently lose it because your line is caught around your chest pack, wrist, fighting butt, or a surprising number of other options.)

Sometimes, you start to question your sanity...do normal people find themselves standing in the middle of a river at 2 am throwing fur and foam at the riverbank?  I don’t think the answer to that question is yes.
Good. 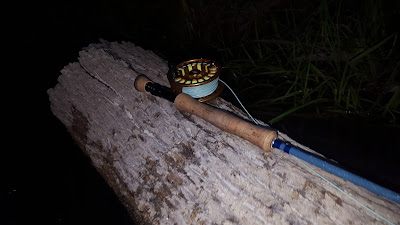